Rottneros has published its interim report January – June 2016. Profit after financial items amounted to SEK 56 million (75) for the second quarter 2016 and SEK 125 million (177) for January-June.

Comments by the President:

”The Rottneros Group reports a good second quarter, in which the decline in operating profit compared to the same period last year may be traced to external factors, such as lower pulp prices and a slightly weaker USD. Return on capital employed, measured over a rolling 12-month period, was a strong 19.8 per cent. In a sector-wide comparison, our return on capital remains at the top end.

”Our Agenda 500 development programme continues to bear fruit, in the form of steadily rising production levels and productivity. The aggregated production volume for our two mills grew by 4 per cent during the quarter, rising to 100,000 tonnes, a record for an individual quarter and a milestone for the Group. The high production levels are the result of goal-focused work and the investments being carried out within the framework of Agenda 500, aiming at a production volume of at least 460,000 tons per year in the long term.”

Renewa to deliver a new biomass boiler to Rottneros 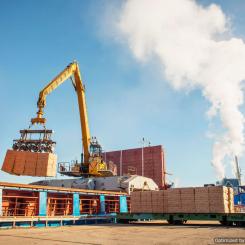 Rottneros invests another 117 SEK within the framework of Agenda 500

Forest owners in the north create a new, large and strong association

Burgo's Verzuolo mill in Italy is up and running again after 10-day downtime due to...

International Paper has named its first-ever chief sustainability officer as it prepares to advance its...

Since 2010, the Two Sides campaign has changed or removed misleading environmental claims of over...

Lenzing appoints Stephan Sielaff and Christian Skilich to its Management Board

The Supervisory Board of Lenzing AG has appointed two new members to the company’s Management...

Södra first in the world with fossil-free biomethanol

Södra has built the world’s first plant for commercial biomethanol, a sustainable fuel from forest...

Dutch solid board producer Eska has decided to equip the PM7 board machine in its...

According to preliminary figures, the European paper and board production has decreased by 3.0% in...

Lenzing ramps up production in China again to full capacity

Following its temporary cutting back of production at the Nanjing site in China, Lenzing has...

Smurfit Kappa has announced its strategy to expand its paper sack business in the Americas...

Ahlstrom-Munksjö has launched its enhanced line of sustainable and safe specialty papers geared towards the...

BSW Group, the UK’s largest integrated forestry and sawmilling business, has been acquired by private...

SunPine has chosen its new CEO. David Öquist, who is currently Managing Director for Pireva...

A new cardboard factory is expected to be launched in Dobrush, Belarus, by the end...

Romania’s conglomerate Paval Holding has decided to purchase a minority stake in local paper and...