Ence (Energía y Celulosa) achieved an adjusted EBITDA of Euro 32.7 million in the 3Q 2016, representing an increase of 25.1% over the previous quarter.

Ignacio de Colmenares, CEO of Ence, said: "We have achieved a strong increase in EBITDA in the quarter thanks to efficiency improvements that have led us to reduce the cost of production in line with our Strategic Plan."

"Besides, it is to be noted the good performance of our energy business, which doubled the volume of generation in the quarter and increased its revenues by almost 70% thanks to the optimization of our production, which has enabled us to profit of better energy prices."

The global demand for pulp remains very strong, with an increase of 2.8% so far this year, driven mainly by China, where demand grew 12.4% between January and September. Given the good performance of demand, Ence has announced an increase in the price of pulp in $10/t from October.

Thanks to the strong cash generating capacity of Ence, net debt was reduced by Euro 7.7 million in respect of the registered late last year position, and stands at Euro 233.5 million, after dividends amounting to Euro 24.9 million and Euro 8.6 million of the share buyback program.

Ence is one of the main European producers of eucalyptus pulp, the most important Spanish company in the production of renewable energy using forest biomass. 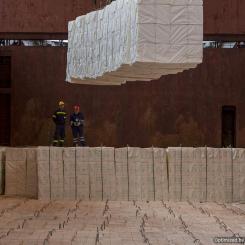