“We continue to make our units more competitive and robust through a new comprehensive cost reduction programs. At the same time, there is significant progress in realizing the new growth initiatives. All these measures will be effectuated simultaneously but further progress depends on a successful outcome of the on-going recapitalization process,” says Lars P.S. Sperre, CEO of Norske Skog.

Norske Skog is a global leader in production of newsprint and magazine paper. The company has 9 paper mills around the world. 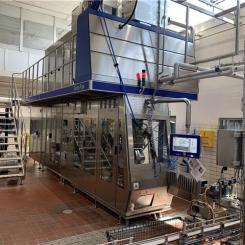 At this time of year it is usual for softwood lumber prices to be lowering,...
Annons

IT Tech Packaging, a leading manufacturer and distributor of diversified paper products in North China,...

Genera, a US manufacturer of domestically sourced and produced ag-based pulp and molded fiber products,...

Toscotec to rebuild the dryer section of PM4 at Aviretta, Germany

Axelle Barnet, PhD student of the LGP2, recently defended her doctoral thesis: "Understanding of the...

The Empire Recycled Fiber mill is in development in Fairless Hills, Pennsylvania, on the site...

As part of its forward-thinking innovation strategy, Coveris has opened the doors of its new...