Dr Utz Tillmann, chairman of the German Association for the chemical industry, showing figures proving that the expectations on the economies and the investment climate of the BRICS countries (Brazil, Russia, India, China and South Africa), especially China, Russia, and Brazil have not come to fruition.Photo: Simon Matthis
Participants at the Zellcheming conference. All speaches were simultanously translated. Photo: Simon Matthis
Published by
Simon Matthis - 2 Jul, 2015

- There is a lack of innovation culture in Germany. Without raw materials and high energy costs, we need more innovation, we need to use our brains and develop a culture of innovation, Utz Tillmann stressed.

He then compared the chemical industry in the US, where energy is cheap, partly due to the political decision to scrap nuclear energy in Germany after the Fukushima catastrophe, partly due cheap natural gas from fracking technology in the US. He also praised the innovation culture in the US.

Utz Tillmann then showed figueres proving  that the expectations on the economies of the BRICS countries (Brazil, Russia, India, China and South Africa), especially China, Russia, and Brazil have not come to fruition.

- We were hoping a lot for China, but we are now focusing a  lot on India, that’s what really interest us, Utz Tillmann said.

Accoridng to him the competiveness of the German chemical industry is its resource efficiency, and its weaknesses are in brief: excessive energy costs and an educational system failing to attract new natural scientists. 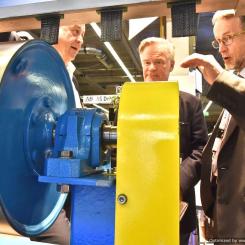