RenFuel and Nordic Paper have signed an agreement to build a production test facility in Bäckhammar, Sweden, in order to test manufacture an advanced biofuel based on lignin. The project has been granted SEK 71 million ($8.7 million) by the Swedish Energy Agency.

“Our product Lignol is the key to reaching the goal of a fossil free vehicle fleet in Sweden by 2030. We are very pleased to finally being able to put the product into large scale testing,” Sven Löchen, CEO of RenFuel said.

The production test facility will be built inside the Nordic Paper pulp factory in Bäckhammar, and will be ready for production by the beginning of 2017.

If the production tests are successful, the next step will be large scale production of Lignol to meet the demands of the rapidly growing market for biofuel. Lignol has the potential to quickly lessen the need for fossil oil, and it’s a realistic way of reaching the goal of a fossil free vehicle fleet by 2030.

"The paper and paper pulp industry is an important link in the bio economy. We can, through this cooperation, contribute tangibly to a fossil free future. That is incredibly gratifying,” Per Bjurbom, CEO of Nordic Paper, said.

Another important factor is the availability of refineries that have the capacity to produce diesel and gasoline from Lignol. Preem has since 2010 gradually adjusted its production toward renewable fuels through exchanging crude oil with for example tall oil. 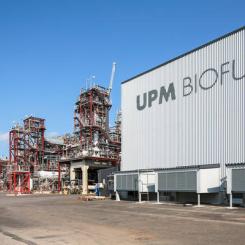